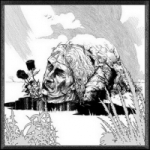 Shortly after the release of the impressive third album, SPECTRAL LORE joined forces with (also) Greek LOCUST LEAVES. First off is LOCUST LEAVES. An unknown band ’till now who perform a thrashy kind of Black Metal with a lot of intensity. After 3,5 minutes this track breaks apart to a more dramatic instrumental / spoken form. A brave move and most important: convincing. Their style sounds like a mix of NEGURA BUNGET and ANATHEMA. With SPECTRAL LORE’s contribution to this split, the 15:25 min track ‘Duty’ offers again an incredible job for a one man piece. The first part sounds like rather traditional Black Metal of a very high level. Kind of similar to SATYRICON from around "The Shadothrone". After 6 minutes things take a dramatic turn and as soon as the sound of the sea sets in, things reach epic heights. Well, for my taste this part takes too before it reaches its shores. Ayloss vocals sound more similar to BURZUM than they did on "Sentinel". Musicwise, especially the first part sounds more mature than the outbursts on the last album. Since two bands are able to captivate rather similar atmospherical excellence, it’s likely that there is a well opened and yet to be explored by other opportunists. Looking at the history of Greece, more bands had the urge to walk this path of expression. HORRIFIED and NOCTERNITY are only a few examples. If you’re a fan of experimental Black Metal and don’t fear a rather atmospherical and ambient approach that rid of some unwritten black laws, this might be a treat. Check the following links below: www.orderoftheta.com for more info and price. SPECTRAL LORE: http://spectrallore.bandcamp.com. LOCUST LEAVES: www.locustleaves.com. On this visually really cool website they have all their music uploaded for listening.