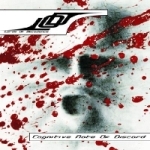 According to the label’s info sheet on Austrian melodic Deathers LORDS OF DECADENCE, the band was voted ‘Best Newcomers of 2004’ by Rock Hard magazine, Germany. Well, I must say: the melody lines LORDS OF DECADENCE come up with are pretty good indeed. A more than just solid songwriting supports that statement. Some of the guitar leads are brilliant indeed for the genre and with the title track the band composed something I’d almost call a hit. BUT: especially this particular song also shows the weak points of this album: for me it lacks depth. Nice melodies but that’s it. Is this still Death Metal? And I’m not talking about the use of melodies. Where’s the darkness, where’s the aggression, where are the BALLS? Compared with the new DARK TRANQUILLITY for example, “Cognitive…” is nothing but elevator music. My main point of criticism is – as usual – the vocals. Leaving aside cynical theories that the genre of melodic Death only exists because the bands can’t find good (clean) vocalists, LORDS OF DECADENCE definitely did something wrong about the vocals which simply lack aggression and variety. Comparing them with SOILWORK on the info sheet simply creates anticipation the record cannot satisfy: The song ‘1st Division Triplehorns’ probably comes closest to SOILWORK vocal lines and chorusses but never reaches the Swedes’ qualities. At all. Maybe LORDS OF DECADENCE took too much time in the studio because somehow the good sounding production seems to be swallowing a good amount of aggression as well. Whatever. The overall lack of balls doesn’t even seem to be coming from the too dominant, overly sweet keyboards. A rather plug and rock mentality therefore might have made the distinction between Pop Music and Heavy Metal. This is simply not enough for me but let’s wait what LORDS OF DECADENCE come up with in the future.