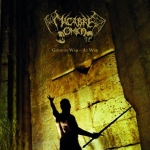 As the observing reader may has noticed the album is released by Ván Records, which is definitely a sign of quality. The releases by Ván Records always are some kind of special, the people running this label unquestionable have a good taste regarding extraordinary music. So what makes a German label releasing an album by an unknown band? MACABRE OMEN from Greece are active for two decades by now and "Gods Of War – At War" is the second full-length, ten years after the debut. The band also did six split EPs (plus three demo tapes), but it seems they have been constantly struggling with line-up changes, from a four member group to one man and back again, currently they are working as a duo. And if you take a look at the instruments Alexandros and T.J.F. Vallely are playing you already got the answer why Ván Records took over responsibility. Here we go: vocals, guitars (electric & acoustic), bass, keyboards, mouth harp, drums, timpani, bodhrán, tambourine, gongs, medieval drums, frame drums. The album offers a large scale of sounds, generally speaking Viking or Pagan Metal. It is impossible to mention all the different kind of influences and little details MACABRE OMEN are delivering during the one hour playing time. Sometimes more Black Metal (like the title track), then again more some kind of medieval soundtrack, thankfully without losing the Metal aspect. Both traditional BATHORY ("Hammerheart") influenced parts and more progressive structures. Clean singing as well as Funeral Doom shrieks, mid-tempo pounding and blast beats. All this different trademarks are put together in a pretty awesome way, it sounds totally as if it was made of one piece. If you are daring enough to imagine a mixture of the first three ULVER albums, you have a pretty close impression what "Gods Of War – At War" sounds like. Everyone calling her- / himself a Viking / Pagan Metal fan and not supporting MACABRE OMEN is condemned to listening LIMP BIZKIT and STATIC-X until Ragnarök is coming. www.facebook.com/pages/macabre-omen/508135775900384, www.van-records.de