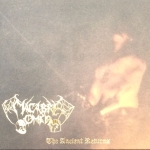 While the name has always been present in one way or another, this is my first sonic introduction to MACABRE OMEN from Greece to tell the truth. They were kinda busy in the mid 90s, at a time when their Hellenic companions such as ROTTING CHRIST, NECROMANTIA or VARATHRON already had 2 or 3 full lengths out. MACABRE OMEN did a series of demos and (split) EPs, most notably the "None Shall Escape The Wrath“ album with KRIEG, JUDAS ISCARIOT and ETERNAL MAJESTY. What we have here is a re-packaged re-release of their debut album from 11 years ago, originally released on Obscure Abhorrence. The thing with those releases from that era is easy to nail, like Jesus is easy to nail to two pieces of wood: with the exception of the fresh (or foul, depending on your angle) air that Norma Evangelium Diaboli or maybe Northern Heritage blew into the genre, tons and tons of mid 00s releases are merely sales bin fodder. "The Ancient Returns“ is somewhere in between: it’s a mix between those dreadful "epic" moments that were all the rage at the time (just think of what SATYRICON has become!), and yes, of course the path paved by ROTTING CHRIST. The whole album creates feelings of epic grandeur, of battle marches, but it just doesn’t touch me. Now I don’t know the early MACABRE OMEN stuff, but somewhere in the back of my mind, I have the feeling that it sounded dirtier, rawer, more "evil" if you will. It’s exactly the way that BATHORY took, or SUMMONING, or even GRAVELAND – and before you jump out of your seat and start to point fingers because I just mentioned GRAVELAND, please keep in mind that the tape version of this album was originally released on Thule Records, a label not known for their philanthropy and political correctness. So yeah, it isn’t a bad album by any means, far from it – it’s just not my style. I’d rather have insane occult rage than solemn battle tales, but this doesn’t mean that this re-release shouldn’t be on the shelves. And hey, they made the original design work 666 times better, so you won’t even have to be embarassed if someone comes visiting you in your mom’s basement. More info at: www.facebook.com/pages/macabre-omen/508135775900384, https://macabreomen.bandcamp.com, label contact: www.van-records.de