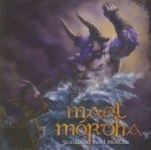 This is the second release of the Irish Doom Metal quartet or as said Gaelic Doom Metal. This is not a normal Metal release. The band is named after an Irish king from the 10th century and their first record "Cluain Tarbh" was about the battle of Clontarf. Now the concept behind this record is about the thoughts before and during this battle as well as in his moment of death. So you don’t get the normal easy food. This concept screams for deep epic song accents with nice piano and keyboard passages, filled with violins and flutes. A great mixture based on classic Doom Metal with nice melodic vocal lines interrupted by faster parts, that really hit you. It’s been a long time since I heard such intense songs with such a great atmosphere and a lot of variation all at the right time. The record will be released on March 16 and all fans of Primordial, epic Doom or Gaelic Folk have to get this one. Contact: www.mael-mordha.com.