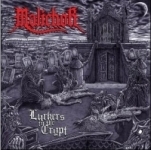 Australia seems to be some sort of a hot bed for a nasty and evil sounding Black / Thrash Metal these days. They do have a countless amount of bands there in Down Under that fall into this blackened Thrash Metal category, this Melbourne-based MALICHOR being just one of those bands, a tip of the iceberg so to speak. MALICHOR have already released 3 demos off which the first 2 demos were released under the MYTH name. "Lurkers In The Crypt" is this 5-piece band’s 4th release in order, containing of 4 songs of pure ripping Black / Thrash mayhem. This 4-track effort from MALICHOR is considered as CD EP but production-wise it sounds like a relatively amateurish demo (like it could have been recorded by using a 8-track recorder), which actually ain’t a bad thing – keeping in mind MALICHOR’s somewhat raw and merciless sounding musical style. In a way, there’s lots of early IMPALED NAZARENE viciousness and extremity in MALICHOR’s way to try to burn each of us at the stake, especially in the title track of the EP, ‘Lurkers In The Crypt’. The remaining last 3 songs also tend to burn hotter than a torch on your skin when it comes to MALICHOR’s somewhat unyielding and savage blackened Thrash Metal outbursts. Satan is definitely happy for getting these Aussies out for some cerebral debauchery parties on the face of the Earth, and most probably both you and me wanna join the party too? Subterranean Black Thrash Metal is the law to be obeyed. www.myspace.com/malichor_au, www.reverbnation.com/malichor