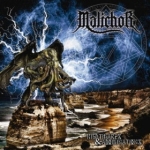 MALICHOR is a band from Australia formed back in 2011 and this is their debut album. When a band is announced as Black / Thrash sometimes I am expecting another VENOM / MOTÖRHEAD / BATHORY kinda combo, and in this case it is quite good to assure you that it is not like that. Yes, there are influences form all those bands, but I also find some old school Death / Thrash Metal touches à la SODOM, MALEVOLENT CREATION and SLAYER. As a matter of fact the overall result at times reminds me of two of my favorite Swedish bands in the form of SWORDMASTER and mighty UNANIMATED. The production does the work in a very good way as it sounds powerful, not over produced and shows a band that goes right for the throat. I must mention the very good solos that are used through the songs, and that the band has a very good sense of melody, the kind of dark, wicked melodies that are sinister enough, yet have a beauty on their own. The last song ‘Descent Into Madness’ also has a Greek flavor with some VARATHRON and ROTTING CHRIST auras, that makes this record quite entertaining and definitely one of the best in the style in quite a long time. And let’s not forget the amazing cover art. Fans of killer underground Metal, attack! www.facebook.com/malichor, www.facebook.com/ibdc666