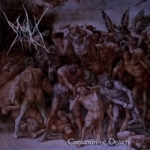 Quite a bit more basic and grim than labelmates ODIUM IMMORTALIS, one-man-project MALUS musically concentrates on the nasty side of the genre. Though multi-instrumentalist Wargrath (real drums!) obviously comes from Germany, this record sounds Norwegian through and through. Being the fourth MALUS CD already, “Creation Of Death” appears to be a concept album from a pretty anti-human point of view. Occasional majestic keyboard (intros) create a powerful contrast to the fury – an impression which fortunately isn’t ruined by a crappy production. Pretty good songwriting as well though I completely fail to understand or like that short groovy passage in the title track. Anyway, I can’t see any reason why a Black Metal maniac shouldn’t look for this release. www.naturesrevenge.de, www.immensestorms.de