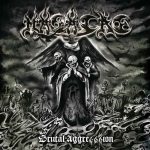 Being a big fan of MASACRE’s early material (especially the debut album "Reqviem" and the "Ola De Violencia" EP), I must admit that I’ve never bothered to check out their later material. I had that gut feeling that it’s probably not as good and isn’t worth wasting time on. Hand on heart – how many VULCANO fans have dedicated as much attention to "Ratrace" as to "Bloody Vengeance"? And how many of those who dig "Muerto En La Cruz" even know the names of TRANSMETAL’s 16th or 19th full length albums? You get the point. MASACRE’s early material have reflected the place and the time they were recorded in, in all their infamous glory. There gotta be a reason why that stuff is still remembered and praised to this day (more than the albums they recorded later), despite the fact that the band has remained active and released more stuff over the years. This relatively new album (from 2014) explains why it’s so. "Brutal Aggre666ion" is nothing more than the trillionth generic album that sounds exactly like one would expect from a band that is heavily influenced by the likes of KRISIUN to sound. The songs here are mainly driven by non-stop double bass pounding (and quite monotonous and boring drumming overall) and guttural vocals. They don’t have much more to offer and they sound quite similar to each other. Some of the tracks have decent solos, but they are really not enough to make the songs more memorable. Make no mistake, this album is not below average. It’s just too average. Die hard fans of KRISIUN might probably even find it enjoyable, but those who want to hear something that stands out a bit – should look for it elsewhere (hmm, this is another proof that tastes can be different, because I totally love this one as much as its predecessor from 2004, "Total Death" – Frank) www.facebook.com/pages/masacreoficial/151283931612611, www.xtreemmusic.com