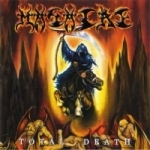 It doesn’t really matter if you like ’em or not, but you definitely gotta respect a band that’s been around for 17 years already and never sold out to the mainstream! Colombia’s very own MASACRE (not to be mixed up with the Florida bunch that gets spelled with a double “s”) is one of those bands. Ever since their origin way back in 1988 they constantly recorded and released material and (apart from a bunch of promo / demo releases and mini albums) “Total Death” is their fourth full length now. It is their first one with English lyrics though, perfectly produced by HATE ETERNAL’s Erik Rutan at Mana Recording Studios in Tampa, Florida. It was an absolute wise choice to name this record “Total Death” as no other title could sum up its content so perfectly! This is indeed total Death from start to finish! The nine featured songs (incl. ‘Conflicts For Peace’, the bonus track on the European edition) are nothing but raw, uncompromising, blasphemous old school Death Metal at its best! It’s really cool to see how immensely MASACRE have matured as songwriters over the years and they have never ever sounded better than on “Total Death”! I have no idea how big Erik Rutan’s influence on this record really was, but the material definitely benefits a lot from the band’s overall increased brutality and tightness. Just imagine how it would sound like if members of INCANTATION would adopt the writing style of earlier MORBID ANGEL and you almost get an idea of what to expect here! This is nothing but pure Hell and to me one of the finest releases in this genre this year so far! The CD also features a video track for the song ‘Violentada’, which is taken from their previous, 2001 album “Muerte Verdadera Muerte” (as far as I know) and reminds me a bit on older SEPULTURA videos due to its rather political footage, which gets mixed with live sequences of the band. So my advice to anyone into DRAWN AND QUARTERED, INFERNAL LEGION, INCANTATION, DISCIPLES OF MOCKERY and the likes is plain and simple: get this album at all cost! More info at www.masacre.cjb.net or www.xtreemmusic.com