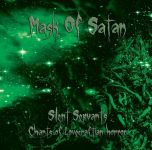 I missed out MASK OF SATAN from Finland and their “Promo 2015” when it was released two years ago and reviewed on our site. But when I saw that Star Spawn Society signed them and is due to release their first full-length, I was curious to check out their tunes and was not disappointed at all. Somewhere between GOREAPHOBIA, NECROPHAGIA and groovy stuff like SIX FEET UNDER the three-piece delivers horror and gore inspired Death Metal. Their style is quite groovy but still technical, with enjoyable leads and guitar solos, fine precise drumming and dark horroresque grunts. The Lovecraft inspired atmosphere and lyrics really work out pretty well and authentic and slowly take the listener on a dark trip into the human abysses. The tempo varies between slow and mid-paced stuff but they also manage to increase the power and tempo here and there and a song like ‘Death Lives In The Cellar Of Mr. West’ is a real neckbreaker with cool samples that also easily could have fitted on a 90s classic like “Osculum Obscenum”. But also the piano performed ‘Daemon Invocation’ with its disturbing distorted vocals shows the musical range of the three guys. Only the production could be a bit more powerful in my opinion as it is kept very raw but this is just a small weakness. If you like the mentioned bands and hunger for some new underground horror stuff with cool riffs and ugly lyrics, check these guys out via the following sources: www.facebook.com/mask-of-satan-1592079117747406, www.starspawnsociety.com