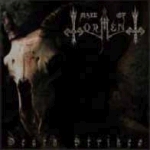 Sweden’s MAZE OF TORMENT have come a long, hard way ever since the band’s origin several years ago. Their previously released two albums “The Force” and “Faster Disaster” unfortunately had to suffer from the lack of professionalism of their old record labels and therefore didn’t reach as many people as they probably could have. But with their newest offering “Death Strikes” things will hopefully change for the better in this department, cause in Necropolis Records they finally managed to hook up with a rather pro-working and quite experienced label after all. Musically MAZE OF TORMENT have once again delivered an album completely true to their wellknown style, which means, you still get a highly aggressive, and in Sunlight Studio extremely raw produced form of thrashing Death Metal (with a focus on the Thrash elements). None of the nine featured tracks (plus an untitled, not mentioned short instrumental to finish the disc) sound pathetic and the guys are definitely far away from being labeled another cheap retro act. I actually have no doubts that they play this type of music straight from the heart! The reason why I still prefer releases by their countrymen MERCILESS or HYPNOSIA is plain and simple. It’s their songwriting! To me MAZE OF TORMENT are still too much lacking in memorable parts and outstanding riffing. It’s kinda hard to remember certain songs and to differ one from another. They are certainly on the right way, but due to the fact that everything is just straight ahead and aggressive, it tends to bore me after a couple of songs already. So, all they would have to do is to come up with a bit more excitement and catchiness (not meant in a commercial / polished way of course), then their future would certainly look a lot more promising.