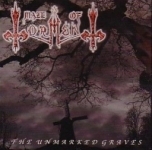 It took damn long until Swedish Death / Thrashers MAZE OF TORMENT’s fourth strike finally could be released. Problems with Necropolis Records financial mismanagement made the band choose to change their label and now they are signed to Blackmoon’s Hellspawn Records. After an almost one year delay the album is unleashed upon all Metalheads worldwide and it is really good! The only point of criticism I would like to mention is the guitar-sound. Death / Thrash in my opinion should sound a lot more sharp and brutal and not so mushy, but that is all I have to grumble about on this release. The songwriting on “The Unmarked Graves” is excellent and varies between fast attacks like the killing title-track, the violent ‘Demon’s Rape’ or ‘Enter The Holocaust’ and dark mid-tempo assaults, e.g. the doomy ’13th Disciple’ or ‘Blinded By Illusions’. Even the cover of THE MISFITS ‘All Hell Breaks Loose’ turned out quite good. I really hope, that this band also gets the chance to promote its newest effort with an extensive European tour, because the songs on it simply have to be performed live!!! This is the kind of Metal that makes you bang at instant and it would be sad, if the potential of this talented and enthusiastic band would be ruined by business shit. MAZE OF TORMENT have never released a weak album yet and “The Unmarked Graves” is another driving and entertaining Death / Thrash release, one definitely should check out! For more information, check out www.hellspawnrecords.com