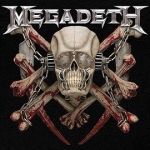 MEGADETH
Killing Is My Business And Business Is Good - The Final Kill
(Century Media Records)
71:36min

This is the classic MEGADETH debut album that was originally released in 1985, 33 years ago on Combat! The performance on this record is great and still kicks major ass. To me, this is one of their angriest and heaviest efforts to date, including some really great stuff that was composed and recorded under the influence of huge doses of drugs and alcohol. And yes, this was their best line-up, in my humble opinion. As this album was remastered once more, it is easier for a little-trained ear hear every detail here: just give some attention to Gar Samuelson’s drumming on ‘Killing…’, ‘Rattlehead’ or ‘These Boots’. As he was a Jazz drummer he added some ghost notes on the snare drum, a resource that was improved on “Peace Sells…” (just try ‘Good Mourning / Black Friday’ or ‘My Last Words’). Samuelson’s drumming was so good that he was able to play double bass drum using just one pedal! Chris Poland was another monster, using some tricky and unorthodox resources here and there on guitars. Nothing new can be said about Mustaine and Ellefson, they still are great musicians (both are clean and new-born Christians now, something that differs from their behavior back in 1984 when Mustaine received US$ 8.000 to make this album possible, but they spent half on drugs and alcohol). This version includes an uncensored version of Nancy Sinatra’s cover ‘These Boots’ (the 2002 remastered version included a hilarious censored version of this track where you can hear a beep on Mustaine vocals at least 13 times!). My favorite tracks still are ‘Last Rites / Loved To Death’, ‘Rattlehead’, ‘Mechanix’ and ‘Killing Is My Business…’. This new version includes 10 bonus tracks: 7 are live tracks from different shows recorded between 1986 and 1990 and the rest is the 1984 “Last Rites” demo. Well, the live songs are not really interesting to me since the sound quality is not really good (well, some tracks from one of the few Kerry King live shows with MEGADETH back in 1984 would be interesting…). The “Last Rites” demo, on the opposite, is pure gold! At the time the band was just Mustaine, Ellefson and Lee Rausch (who later joined DARK ANGEL for a short time). This opens with a raw and brutal version of ‘Last Rites / Loved to Deth’. The other two compositions that originally appeared on this demo were ‘The Skull Beneath The Skin’ and the classic ‘Mechanix’ in its heaviest version ever! The only one from the first 4 MEGADETH remastered versions catalog that deserves to be bought is this one or the 2002 one (the "Peace Sells… But Who’s Buying?", "So Far, So Good… So What!" and "Rust In Peace" remastered versions are awful). But to be honest, I still prefer the raw sound from the original recordings. Get this one only if you need a dose of old school Metal from the golden years of MEGADETH… and bang your head ‘til you bleed! www.facebook.com/megadeth, www.centurymedia.com.