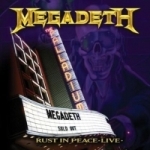 On March 31, 2010 MEGADETH played a sold out show at the Hollywood Palladium in California and taped it for this DVD / CD package. As expected, the result is a very professional release that offers great camera work and excellent picture quality, but an audio part that unfortunately isn’t completely synchronized from time to time… I suppose that might be due to the fact that parts of the material got reworked in a studio… Especially Dave Mustaine’s vocals sound a bit too good for my taste, since I’ve never heard or seen a MEGADETH live show where he managed to live up to his own standards of the MEGADETH studio albums. Instrumental wise the current line-up does a pretty good job and delivers the songs in a very authentic way. But when it comes to true live entertainment, the whole band still lacks in the necessary enthusiasm to win over a crowd completely for many years already… I always get the impression that none of the members really seems to enjoy performing in front of a wild audience anymore. Biggest letdown in that department for me is definitely the returned David Ellefson on bass, who’s just lame. Ok, he’s been a founding member of the band, but when it comes to putting up a real show and setting energy free on stage, his predecessor James Lomenzo was the way better choice for sure! Mustaine himself almost doesn’t communicate with the audience at all and if so, it doesn’t really come across honest, but just fake and arty. There’s no need to be a Dee Snider, but the role of a frontman demands a bit more than what he has on offer from my point of view. Even though I’m more of a fan of the very early MEGADETH period and the focus of this DVD / CD release is the 20th anniversary of the "Rust In Peace" album, I still don’t really get, why the show isn’t featured in its original, uncut running order?! First up ‘Skin O’ My Teeth’, then ‘In My Darkest Hour’, followed by ‘She-Wolf’, then the entire "Rust In Peace" album and after that ‘Trust’, ‘The Right To Go Insane’, ‘Head Crusher’ (the latter two are completely missing on this release) and then the ending with ‘Symphony Of Destruction’ and ‘Peace Sells’ / ‘Holy Wars – Reprise’. On this release six of the non "Rust In Peace" tracks were senselessly just added at the end of the CD or can only be found in the DVD bonus section (along with very short behind the scenes footage). Very strange indeed… Anyway, even though I came up with quite a lot of criticism here, I still enjoyed this release nevertheless. Don’t ask me why. Maybe it’s just because I followed MEGADETH’s career already since their demo days and always liked equally much of their stuff as I disliked. Peace! For even more MEGADETH check out www.megadeth.com, www.myspace.com/megadeth.