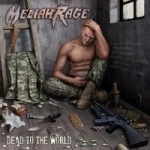 Massachusetts’ own Metal proud MELIAH RAGE has reached another milestone in their long career, their 8th studio album in order, titled "Dead To The World". Mike Munro, who sang on MELIAH RAGE’s previous 2009 album "Masquarade" (as he has also sung on many other MELIAH RAGE albums earlier – being the band’s original vocalist), has now been replaced on vocals by Paul Souza who has previously done the vocals on a couple of MELIAH RAGE albums, too. MELIAH RAGE has always stayed – more or less, an obscure Speed / Thrash Metal band to me, don’t know why. I remember liking the band’s pre-2000 period, especially their debut album "Kill To Survive", and "Solitary Solitude". Then I sort of lost a touch with them for an unknown reason. Back to this day – and back to the band’s newest 9-cut opus "Dead To The World" though. Having been listening to this during the nights for long hours before falling to sleep, I honestly have to admit I have truly enjoyed the heck out of this. Musically – in every light, it sounds like the MELIAH RAGE guys take nothing for granted on "Dead To The World"; they seem to challenge themselves constantly on here, which naturally always gains lots of undivided admiration and respect in my books. I would call this mature and intellectual Speed and Thrash Metal that exposes its multi-layered approach to the listeners in its full capacity, rewarding surely most of us by such a musical experience that shows true strength and power songwriting wise. In fact, there’s nothing there that would be some sort of turn-off on this very intellectually crafted record. The whole album is like a Metal’s great fanfare full of highlights. Also, in my opinion Paul’s more melodic singing style seems to sit a tad better on MELIAH RAGE’s Speed /Thrash style nowadays than Mike’s, although in the very same breath it needs to be said Mike’s powerful vocal approach fuckin’ rules on "Solitary Solitude" – and I could not imagine anybody else but Mike singing on that record. Whether "Dead To This World" is MELIAH RAGE’s best work to date or not, this question can be left in the air for everyone to be decided personally. My opinion still stands the same for this absolutely brilliant MELIAH RAGE album, however. I love it – by every damn cell of mine. Perhaps this is even their best work thus far? So, what else there’s still to be said about "Dead To The World"? Well, one thing is also sure: Metal music loving citizens can still be very proud of their local heroes MELIAH RAGE, there’s not a slightest doubt about that. www.meliahrage.com