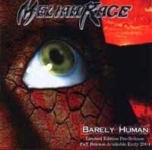 How nice: MELIAH RAGE are still around! But what’s this: did Mike Munro finally learn to sing? Nope, the new singer’s name is Paul Souza. Sometimes he sounds a bit like the guy from MOLLY HATCHET, sometimes like Luther Beltz (ex-WITCHFYNDE) and sometimes even like James Hetfield. His vocal lines are pretty much NWoBHM-influenced and passionate. The music is A LOT slower than in the early days of MELIAH RAGE. The band hardly scratches Thrash speed (‘Invincible’) and stays mid paced most of the time instead. That’s no problem with me as long as the songs are good – and they are. Except for the boring instrumental (much too long) I enjoy most of the songs very much – ideal for the car. Unfortunately, the songs become less striking around the second half of the record. And I don’t mean the sort of “alternative” ballad parts. But still better than quite a few other bands I think. Additionally, we get a bonus CD including the “Unfinished Business” demo and a long interview. I always cared about this band and I still do – despite or maybe even because of the new sound! www.meliahrage.com