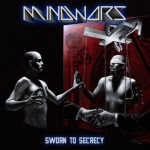 Well, a name like MINDWARS offers a very promising cross-reference. Wasn’t there a fantastic album, the second to be precise, by the Speed / Thrash Metal gods HOLY TERROR that wears this name? A further look at the line-up of that comparatively new band we are talking about now reveals that this hint isn’t not just a coincidence. Except for guitar player Kurt Kilfelt and drummer Joe Mitchell, who both took part in the unsuccessful reunion of HOLY TERROR, none of the members really appeared in the Metal scene again since the split in 1989. With MINDWARS, guitar player Mike Alvord steps back on the map again, taking over vocal duties as well. With two guys from Italy, Roby Vitari on drums and Danny Pizzi on bass, Mr. Alvord now released the second MINDWARS album “Sworn To Secrecy”. Due to his past and the name chosen, the comparison to HOLY TERROR is a more than obvious one. But that wouldn’t do this band justice, for there’s more than Speed and Thrash on “Sworn To Secrecy”. The opening double pack of the title track and ‘Cradle To Grave’ doesn’t really prove that thesis for now, even though the latter has a rather modern sounding, grooving end part. With ‘Lies’ we find the first song that walks a different direction, since this one has a lot of alternative moments and a classic Rock solo part. And ‘Twisted’ is a rather strange one with this not really fitting, galloping chorus break. Even though ‘Helpless’ starts off like a ballad, this one grows to become a nod to HOLY TERROR, with guitar parts that just conjured a smile on my face. The same goes for the opening riff of ‘Scalp Bounty’ – yes, this must be Mike Alvord! To my disappointment, the rest of the song remains a little pale. Straying a little more off the path chosen at the beginning of the album, ‘Rest Now (For Tomorrow Comes)’ turns out to be a mid tempo groover with a more sporty middle part. The pretty much Thrash oriented ‘No Voice’ is a rather tedious song, while ‘Prophecy’ really gets out of line. This one already starts off with a sitar part before it takes a turn towards an kind of Alternative Thrash, with some more HOLY TERROR rememberance guitars included. ‘Prophecy’ means the last fine minutes, since the dreary ‘Release Me’ and the really boring instrumental ‘Transporting’, complete with with sampled voices, really are neglectable. In sum, MINDWARS have delivered an album with ups and downs that tends a little bit in an alternative direction. As far as the vocal delivery of Mike Alvord is concerned, he is doing pretty well and his thrashy Metal voice fits the music. So, if you don’t expect HOLY TERROR here, you might get one or another pretty nice surprise. Check the band at: www.mindwarsofficial.com or www.facebook.com/mindwarsband, and the label responsible at www.punishment18records.com