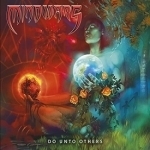 MINDWARS
Do Unto Others
(Dissonance Productions)
47:30min

MINDWARS features Mike Alvord ex – guitarist of Speed Metal legends HOLY TERROR and the bandname is the title of that bands excellent 2nd album that was released in 1988. So does the music on offer here live up to expectations given the chosen moniker? There are very obvious similarities to the high octance energetic Speed Metal assault of Mike’s previous band, they collectively have their musical feet on the throttle and there’s a huge amount of energy on display here as well as the technicality which HOLY TERROR were also known for. But do MINDWARS possess the incredibly catchy hooks and strong charasmatic vocals too? The hooks and riffing are definetly there and Mike does a very good job with the vocals and has a powerful delivery and a style which is very harsh and has more in common with early DARK ANGEL, SODOM, SADUS and DEMOLITION HAMMER viciously spitting out the lyrics. It’s hard not to draw comparisons with HOLY TERROR when the musical links are so blatant and obvious and I’m sure Mike Alvord knew that would inevitably end up happening when choosing to name his latest band after such an iconic and cult album. The riffs fire out of the speakers with technical and deadly precision with stellar lead work throughout and the whole thing is bolstered by a tight powerful rhythm section and a barrage of double kick drumming with every instrument cutting through the crisp, heavy and sharp production clearly. HOLY TERROR this may not be but in 2018 it is definitely the next best thing musically and any die hard fan of that band should check out this album as there are so many similarities. Locked and loaded, MINDWARS are ready to make a very powerful and effective strike upon the Metal scene with "Do Unto Others". A savage Speed / Thrash Metal assault of the highest calibre and will slot in nicely next to the HOLY TERROR releases in an album collection. www.facebook.com/mindwarsband, www.dissonanceproductions.co.uk