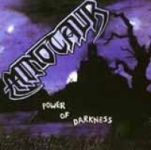 A German Thrash band from the 80s, that disappeared after some demos, some EPs and one album got released is not really an outstanding phenomenon, is it? Moreover – even though MINOTAUR was formed in 1983, when so many demo bands were heavily inspired by the evil / Satanic madness of VENOM, the LP in question got properly released as a full length in 1988, after bands like SODOM, DESTRUCTION, SEPULTURA and POSSESSED turned their backs on Satan, to concentrate on socially-aware songs. Nevertheless "Power Of Darkness" is a forgotten gem that deserves to be reprinted and made available to the public again. After a LAIBACH’s vocalist-like voice finishes the intro speech – the song ‘Fierce Fight’ starts a merciless 80s blackened Thrash attack that doesn’t calm down until the album is over, with a sole and short exception of the acoustic guitar intro ‘Prelude’, which reminds of KREATOR’s ‘ Choir Of The Damned’. Unlike the intro voice – the vocalist sounds similar to Mille / KREATOR, perfectly fitting the atmosphere of an album that features songs like ‘Incubus’ and ‘Necromancer’, backed up by riffs that could fit one of the first 2 KREATOR albums, resembling METALLICA’s debut stuff (e.g. the opening riff of ‘ Maggots In My Body’!) and savage solos to bang your heads to. Even the bass sounds very clearly (better than in many "professionally produced" classic LPs). This album was originally released as a demo already in 1987, featuring 7 songs. The 1988 official full length version was expanded to 10 tracks. The current reissue on I Hate Records offers the same core, but this time with 4 bonus tracks, recorded in the same White Noise studio in 2009, 22 years later. I haven’t heard MINOTAUR’s comeback album yet, but these tracks show that MINOTAUR’s musical direction hasn’t changed. On the other hand – these songs don’t sound as convincing as the album tracks, but more reminiscent of such stuff as the Colombian WITCHTRAP’s cool yet worn out sounding "let’s just sing about praising Metal all the time!" tunes. When all is said and done – this album is way more vital than the majority of nowadays young Thrash bands’ albums and many other so-called once "cult" releases that didn’t gain much success back in the day for the right reasons, so give it a try if you dare and don’t forget to return to the opening track (or even skip the intro as well), in case that the bonus tracks sound like absolute filler stuff for your old Thrasher ears! www.myspace.com/minotaurthrashers, www.ihate.se