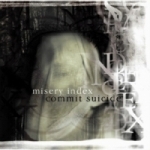 Earache seem to have inked a license deal with Willowtip Records for Europe, as there’s a bunch of their releases coming up via Earache in the next couple of months (CAPHARNAUM, WATCHMAKER, CROWPATH…). One of them also is the classic MISERY INDEX / COMMIT SUICIDE split CD, which originally came out in the summer of 2002 and was MISERY INDEX’s follow up release to their excellent "Overthrow" CD on Fadeless Records. They are joined on this disc by Pittsburgh’s COMMIT SUICIDE, a band that is musically kinda close to MISERY INDEX (extreme Death / Grind, but with a little bit more deathly vocal delivery) and therefore definitely were a perfect choice for this release. The 6 track effort features 2 exclusive own songs as well as a coverversion by both acts. MISERY INDEX are blasting through their songs with the typical TERRORIZER / NAPALM DEATH intensity and there’s even a little DEATHSTRIKE / MASTER influence to be tracked down in the song ‘Alive?’, which has a big ‘Mangled Dehumanization’ feel to it (I also love the "Eins, zwei, drei, vier…" towards the end of it, hahah!). Unfortunately I am not familiar with the original version of MISERY INDEX’s cover choice (‘Reality Distortion’ by DISRUPT), but I could at least tell you that COMMIT SUICIDE’s interpretation of ‘Open Casket’ (DEATH) did turn out reaaaally impressive!! Even though I totally love all the regular releases by MISERY INDEX I actually enjoyed COMMIT SUICIDE a bit more on this release. Uncompromising, raw and straight into your face intensity, performed with the necessary brutality. Very cool! So, if you haven’t bought the Willowtip version already, make sure to go for it now!