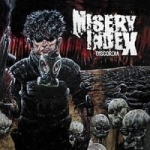 You think that politics and Metal are best kept separated? You hate nothing more than the “spoiling” of Death Metal’s supreme power with Punk / Hardcore-energy? And you think that the only true soul of Metal lies in the spirit of the European scene back in the eighties? Then better stay away from this record. Everybody else with only the slightest interest in extreme music based on distorted guitars get this immediately! MISERY INDEX’ debut “Retaliate” totally blew me away when it was released back in 2003. Such a ferocious amalgamum of Thrash / Hardcore / Grind’n’Death, combined with remarkably intelligent lyrics was pretty much unheard off at that time. And witnessing their crushing live-performance in a little fucked-up autonomous-cave in Leipzig made it clear that this definitely was a force to be reckoned with for years to come. Having missed the “Dissent” – EP I didn’t really know what to expect from this their second longplayer and was a bit disappointed at first. There are no massive changes in style here but the band progressed towards a more varied songwriting which at first seemed to lack the overwhelming aggression of their first effort. Adding to that impression was a slicker production which takes away some edges of their sound and a mix which could feature Jason Netherton’s unique angry-pitbull-on-crack-vocals a bit more upfront. But after a few spins all this nut-picking vanished in sheer admiration of their newfound diversity and well-rounded arrangements. They may have become more controlled and mature but were “Retaliate” was more or less blasting intensity from start to finish, “Discordia” is all force through dynamics and full of rewards for the careful listener. And once again the lyrics are more than worth reading. Whoever finds their radical left-field “eat the rich” – attitude a bit far fetched should consider that they’re written from the perspective of ‘your average American’ whose everyday-struggle can’t really be compared to that of a (still?) relative socially secured middle-European. Anyway, I can’t think of any better soundtrack for a revolution and if extreme Metal still holds any relevance it is due to acts such as MISERY INDEX. All hails! www.miseryindex.com.