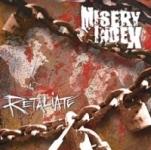 At last we have the first album of this American band that emerged out of DYING FETUS, when John Gallagher decided to kick out the other three members of the band after the “Destroy The Opposition” album. So it was then when Jason Netherton, Sparky Voyles and Kevin Talley formed MISERY INDEX and after one mini CD and various other splits, they signed with Nuclear Blast. Now without Kevin, but with another drummer equally as good named Matt Byers, they attack with their debut full length “Retaliate”, an excellent revenge that has the good point of not falling into what everybody could expect, that is, another copy of DYING FETUS. Although they would be the most worthy ones to do it for obvious reasons… But instead of that, they’ve done of their style something way faster and carving into more grinding territories. Lets say that it’s like if we mix DYING FETUS with some TERRORIZER, NAPALM DEATH and even EXTREME NOISE TERROR. Heavy and catchy riffs, very fast, intense… all in all 10 songs with an excellent production that could easily create a new tendency like DYING FETUS once did, if not, time will tell.