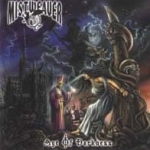 What at first sight felt like a release akin to dozens others, slowly developed into something rather well done. Mistweaver play melodic Death Metal, with variation and an added dose exoticism. Frankly speaking, I didn’t notice their origin the first five spins, but I didn’t become surprised to solve Mistweaver’s homeland. Our Spanish Metal friends haven’t given us the prime examples of Death Metal, besides Avulsed. Mistweaver are not up to par either, but there are elements in their songs that make me wish "Age Of Darkness" was their debut album, not their fourth. As said, their music is safely placed in melodic Death Metal. They surprise us with tempo changes and small nuances in the songs. In ‘The Sun Turned Into Blood’, I spot a crystal-clear Helloween inspiration after 1:05 minutes. A jolly good part that makes me smile. Hmm, it may not be the main intention of Death Metal, but I’m also into music for entertainment. After 2:07 minutes they slow down and give us another part of über-melodic Metal that again makes us smile. OK, so there are some Cradle Of Filth whispers and a false male vocal around 3 minutes, but I still credit Mistweaver for trying. "Age Of Darkness" is well played. They arrange their songs with intention, instead of just placing one part after the former. The way ‘The Curse’ builds is nothing but a super moment in Mistweaver’s musical career. It’s no big surprise that this track turns out to be the prime moment of "Age Of Darkness" despite the strange ending. I mean, here they write a super riff, just to end the song after repeating the riff for only 20 seconds. The major drawbacks of the album, and the reason I decided to not send them any questions are some vocal parts and the horrible keyboard. I’m not saying the keyboard is out of tune and played by a 5 year old kid, and it does even fit here and there. Though, in the beginning of ‘Malefica Non Patieris Vivere’ they could safe and sound have avoided the use of the keyboards during the first minute. Trust me, the riffs and the melodies work fine on their own. No, it’s the sound of the keyboards. I can’t imagine the band in the studio, be it inside the recording (Vrs Studios) or the mastering studios (Finnvox Studios), cried out loud in joy. The sound is mostly so thin that it’s super annoying. And that’s a MAJOR pity, since the music is good and challenging. Listen to the first half a minute of ‘Malleus Maleficarum’. That’s the way to go, without keyboards. The Death grunts are fine all over despite the obvious accent, but the woman they invited as a guest has to be a friend of theirs. Actually, she has to be such a good friend that they didn’t dare to tell her that her vocals suck. I’m reminded closely of the horrible trend during the 90s, where every other band included an awful female guest vocal. And the normal male vocals are not much to brag about. It’s a sad thing when there is one element, such as the keyboards in this case, that destroys an otherwise fine album. Mistweaver should have included major Dimmu Borgir – like keys, or skipped keys all the way. I know, they don’t have the necessary funds to get a sound like Dimmu Borgir, so… And I must credit the band for the booklet. Ahh, it’s been a long time since I saw such a fine booklet. And also for the fine folk-part during ‘Eternal Rest’ popping up after 2:15 minutes. I didn’t find anything about Skyclad in the booklet, but it suits Mistweaver’s brand of Death Metal. One more thing I have to mention, due to the closer ‘Melancholy’. Reader, ask yourself which Death Metal album you like that does not end with a super heavy real Death Metal track, be it slow or fast? Actually, I can’t thing of one. More or less all the classics ends with something deadly, be it Death, Morbid Angel, Entombed, Deicide, Dismember, Immolation, Vital Remains, Rebaelliun, The Chasm and more… Mistweaver’s "Age Of Darkness" is not the classic it could have been, and ending the album with an acoustic piece of melancholy (sic!) doesn’t add to the wanted "classic" status every band should try to yearn for. www.mistweaver.org, www.goldenlakeprods.co.uk