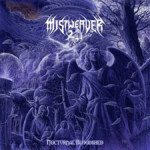 You can usually count on Spain to produce some epic Metal. And MISTWEAVER’s "Nocturnal Bloodshed" fits right in. A far cry from vocalist / guitarist Raul Weaver’s pure Death Metal band MASS BURIAL, MISTWEAVER create a more melodic style, with a few keyboards thrown in for good measure. There are even a small amount of female vocals mixed in on a couple of tracks. The cry of an infant heralds the beginning of this adventure in ‘The Birth’, then is overrun by machine-gun drums which lead into a powerful beat and a touch of keyboards. Raul’s vocals deliver as usual while blending with Eduardo Alonso Santos’ classic riffs. ‘Pandemonium’ begins with a brief female vocal, then is swarmed by more blistering guitars. The female vocals bleed back in, as the track evolves into a majestic piece of melodic Death Metal beauty. The album continues with the downward metallic spiral of ‘Hell’s Arrival’, the thrashy ‘God Is Dead’, the monumental death growl of ‘Nocturnal Bloodshed’, the glorious ‘Perpetual Darkness’ (with a little spoken word thrown in), more female serenading in ‘End Of Times’, and ending with additional spoken word, beauty and aggressiveness all rolled into one in ‘Deceiver’s Fall’. And yes, I judge a book by its cover. I first noticed this album by the hauntingly gorgeous cover by Juanjo Castellano (who also provided my favorite Death Metal cover of all time…MASS BURIAL’s "Soul’s Necrosis"). You can pretty much guarantee that any album for which Juanjo does the cover will be worth a listen. He fully captures the essence of each album. I simply cannot turn away. And guess what? After MISTWEAVER’s cover sucked me in, I discovered a new band who delivers. For more information, check out www.facebook.com/pages/mistweaver/139701902800114, www.satanath.com