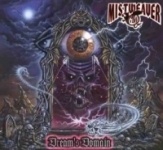 Yes, definitely if a band really wants to make things in a right way, they do it. And that’s the case with this Spanish band. MISTWEAVER are not new in this as they had another CD released called “Sol Obscuritatur” that was not bad at all although I think it didn’t got the attention it deserved. Now, here we have their second release “Dream’s Domain”, that is a more than good progression for the band. Starting with its production, that is really awesome and continuing with the music displayed, I can tell you that this band is really good! It’s melodic Death Metal with a great importance given to the melodies and an incredible use of the keyboards that are more than the usual complement to the music, as they’re used as if it was a fourth instrument. The first CD had some influences from AMORPHIS in it, and although this time they still sound like this band, they have now added some epic touches to their melodies, which sound similar to bands like MITOTHYN. The whole CD is very good, as you also have a very good layout that complements it. Don’t be a fool and check this band out. This is a great release, for sure. Contact: www.dragondesign666.de