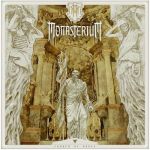 Well, well, what do we have here? Nothing more and nothing less than MONASTERIUM, a band which I do not have the smallest idea about and, to avoid any prejudices, I denied myself the opportunity to search them or check them out before I wrote this review. So, I push play and… oh, wow, what a nice surprise! The voice, warm yet powerful at the same time, slides in just seconds after the first riffs of this pleasant Heavy / Doom Metal experience blast through my speakers. It is unavoidable to draw comparison with the godly Marcolin (I did not consider necessary to specify the band I am alluding to here). In a world full of thousands of bands emerging by the minute, it is always a great experience when you let yourself be surprised. Keep your capacity alive to be astonished. And remember, these first lines are being written while I listen to the songs. I am trying to let the communicative capacity of the music work its magic on me, and I have found this to be the most honest way to come up with a review. Music always transmits something more than the mere performance of well-played instruments, and MONASTERIUM achieved it from the first song. Let’s see what happens when I push fast-forward… A pulsating bass and a “punchy”, guitar, I like it! And that voice again… is that you, Marcolin? No, he is not! And the proof is the beautiful harmonies with the two sampled voices heard in ‘Dance Macabre’, the second album track. Just two songs and I made a decision: this will be my soundtrack when I pay a visit to the Sedlec ossuary in Kutna Haro, Czech Republic. By the lyrics, it is almost certain that the band had this church of bones in mind when they wrote the tile track, ‘Church Of Bones’ (and if you do not know this ossuary, Google it up! And plan your next trip over there!). The ears of any Heavy / Doom Metal fan will have a feast with this magnificent sonic beast. A carefully crafted production and a powerful music that relies heavily upon the might of the lead singer, with a voice that is pretty uncommon to listen to nowadays. This collection of chants will take you heading straight to Hades. Hell! I even can imagine good old Charon doing a slightly noticeable headbanging to the song dedicated to him, ‘Ferrier Of The Dead’, cymbals sounding like a hammer pounding the anvil setting the beat for Charon to row back and forth the shores of the Acheron on his dreaded boat… Two hours later… I had to stop writing and let the album play a couple of times and take the writing once again, otherwise I would endlessly bore you, dear reader, with my track-by-track ramblings. Lo and behold, my “mea culpa”. Where the hell was I, that I totally missed this Polish band until now? “Church Of Bones” is a disc full of surprises, from slow, funeral dirges such as ‘Embrace The Void’ to more epic overtones with a unique touch and a slight twist that gives MONASTERIUM a distinctive sound. If I compared Michael Strzelecki (their lead singer) with Marcolin, it was not meant in a derogative way; on the contrary! If CANDLEMASS ever take Strzelecki to their ranks, there will be no Marcolin missed! (Sorry, Messiah, ha ha). I must confess: it has been quite a long time since I had a listening experience as pleasant as this one. The riff work of guitar player Tomasz Gurgul is simply impressive and the whole band goes marching into epic realms of music thanks to the rhythmic bass of Filip Malinowski and the musically-driven drumming of skin-beater Maciej Berniak. If Vlad Tepes had an iPod, surely ‘The Order Of The Dragon’ would have been his song of choice to attack the Ottoman Empire. The MAIDENesque influence can be heard on ‘The Last Templar’, the closing album track. Again, as if Smith, Gers and Murray were trying to come up with simpler melodies and Harris would limitate his bass playing to a few pulsating notes… or as if IRON MAIDEN were aiming their ship to Heavy / Doom Island. It must be added that this last song has a video clip, so you might as well check it out. To sum it up, here I am before the (charred) walls of Notre-Dame. MONASTERIUM has left me beyond amazement. But, unlike De Molay, I am at loss for words (big horror!) to end this review properly. I am flabbergasted, truly, by this piece of epic melancholy and dim atmosphere. And if this review does not motivate you to at least give an ear to MONASTERIUM, then my days as a reviewer are counted. Die in peace. www.facebook.com/monasteriumdoom, www.nine-records.com