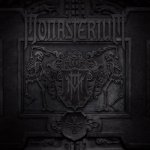 MONASTERIUM is a Polish band that plays an epic Doom Metal that I must say I find most reminiscent of CANDLEMASS; as soon as I started hearing the first track, ‘Christening In Blood’, albums like "Nightfall" or "Candlemass" naturally sprang to mind. That said, this self-titled debut endeavour is, objectively speaking, a definitely strong offering. The production is crystal-clear but very heavy, the vocalist Michał Strzelecki sings with passion and commitment, and the songs are very melodic in the best possible meaning of the term. It is far, very far, from boring or depressive and, in the best tradition of eighties’ Doom, you can hear the Heavy Metal in it. They know how to quicken the pace just enough and sprinkle their music with variation. Listen to those effective tempo changes in ‘A Hundredfold Cursed’. The songs show the composition effort, aided by the fine musicianship. The instruments are well played, including some nice, interesting touches in the way the drums and bass lines progress. As fine as all the instrumental parts are, I guess the vocals really shine, often working beautifully with the rest, such as in the excellent opening track. Judging them from the titles and what I can hear, they seem to be rather Christian. Still, knowing for example that the final song is inspired by the 1982 "Conan the Barbarian" movie, it’s easy for me to sympathize with them. That and above all the fact that they are responsible for such well-crafted Metal. Very good. www.facebook.com/monasteriumdoom, www.noremorse.gr