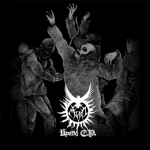 If you’re intrigued by this Russian band and wish to know more about them, this EP is as good a place as any to start. Consisting of four tracks, one of which is a cover, another a boring instrumental, another an overly long snooze fest, and yet another an actually good song, this short EP caters to all kinds of tastes. The second track, ‘D.C.F.T.N.’ is the only good example of what MOR does. It starts off slowly and plods through a few melodies and verses which do anything but convey grimness and desolation. Like so much Black Metal these days, this needlessly long song (it clocks in at 13 minutes and 10 seconds) is alternately weak and heavy. Yes, there are good parts, but much too much of it relies on the “depressive” formula: monotony, annoying vocals that sound more self pitying than anything else and melodies that sound like they were borrowed from a much better folk song. And as if that wasn’t enough, two minutes of nature sounds continue after the song itself has finished. Anything to make the song as long as possible, right? In stark contrast, the title track, ‘Blood’ is everything the last track is not. It’s fast, it’s actually good, and it’s short! Finally there’s the cover song, ‘Quintessence’, by DARKTHRONE. Just go with the original. MOR is good when they want to be. But it seems most of the time they’re more interested in Black Metal that is depressingly boring, not merely depressing. www.myspace.com/morlegion, www.assault-crew.net