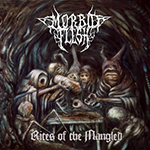 Spanish lunatics MORBID FLESH celebrate their 10th anniversary with the release of their second full-length album "Rites Of The Mangled“. And this second output really turned out pretty well. The opener ‘Circle Cursed‘ is a really groovy old school monster. Dark grunts with catchy riffs and cool leads and breaks mixed with good drumming and varying in speed between fast, mid-paced and slow, nearly doomed Death Metal. Their influences go from US stuff like IMMOLATION and MORBID ANGEL to Scandinavian styled Death Metal like early ENTOMBED or old HYPOCRISY but the European roots dominate in my opinion. Especially their dragging parts like in ‘Burn The Entrails‘ really immediately caught me and combined with the catchy leads the material turned out pretty diversified and really is the best old school Death Metal I heared since the last LIFELESS album. Every song has at least one of these special moments or maybe a few of them which immediately brings back the old emotions everyone of us had when we fell in love with that kind of Death Metal. Apart from the good songwriting worth to mention is also the brilliant clear and powerful production, which really enriches the power of their material. Rounded off by an genre-typical artwork, this output is really worth to check for all old school Death Metal fans and hopefully the band will get the deserved attention in a time where good stuff starts to perish in the mass of the releases again like in the mid 90s. For more info about the band, please check the following sites: www.facebook.com/morbidflesh, www.unholyprophecies.com or the full album stream on YouTube.