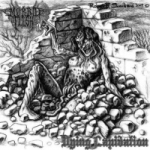 Anybody who read Mystical Music Zine # 14 (by staff member Ralf Hauber) probably ran into this Spanish band and learned that this band started out as UNDERTAKER. Drummer Jordi Gusi and some friends (including Mendia, aka vocalist Blasphemic Vomitor from INSULTER) from Sabadell are responsible for the Sabathell Organisation who arrange Death Metal parties, book local bands and generally support Death Metal in a matter that makes me want to send eternal praise and big hails to these warriors. Even with low budget these guys support the scene in a way that is so important and priceless that I hope these guys one they get the credits they truely deserve! Well, their ambition doesn’t stop here and under MORBID FLESH they present some juicy, blood-drenched Death Metal that is as old school as their monicker! In 5 tracks (including the DEATH cover ‘Scream Bloody Gore’) they execute some great tracks with some heaviness of ROTTREVORE, GRAVE and FUNEBRARUM with the rage of old DEATH, AUTOPSY, EXMORTIS etc. VERY effective (in its simplicity) and a perfect and welcome example of the resurrection of old school Death Metal. Tight musicianship, the right brutality and enough variation to make me wonder why they haven’t been picked up yet. Just check the monstrous opening track ‘Endless Hate’ or ‘Dying Lapidation’! This speedy demo is a great starting point and I hope to hear more of these guys in future. Don’t know any price, so check www.myspace.com/morbidoflesh to get in touch.

This is the 2009 demo of this band originally formed with the UNDERTAKER banner. So far, the name change seems to be a better way to evolve, as from a melodic Death Metal band, they went into a more morbid form of Death Metal, which takes many elements of the first wave of Death Metal from Sweden and a bit of the American style. What really takes the attention here is the very powerful guitar tone, like a recharged version of the Sunlight sound, to a point in dangerously falls near a wall of pure noise, thus evoking the sound of more Doom orientated bands like INCANTATION, thus never being a Doom Death Metal band. If the riffs were a bit easier to distinguish, and the band was not afraid to use a bit more dark melody in the AUTOPSY vein, this will be a true masterpiece. This re-edition contains an extra track in the vein of the DEATH cover for ‘Scream Bloody Gore’ and this was done in the MORBID FLESH style so it was even a bit hard to really make out this was a cover and not a song of their own. At this time this Spanish band has already released a full length album, and if this demo is just a teaser of what they can do, I am for sure looking for it. www.myspace.com/morbidoflesh, http://blazingobscurity.blogspot.com