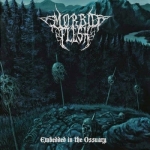 MORBID FLESH are already active since 2007, but have been working under the monicker UNDERTAKER before since 2002. After their first full length in 2011, which I sadly have missed, they return now with a fulminant EP called "Embedded In The Ossuary". This hellish piece of old school Death Metal is a real wrecking ball. After four spins now, I am totally into their material. Heavily influenced by old school Death Metal from Sverige and its classic protagonists like ENTOMBED, DISMEMBER and old HYPOCRISY or even newer heroes like BLOODBATH, these guys from Catalonia found their own interpretation of this classic style and really breathe new life into it. Adding some dark and doomed guitars, the opening instrumental track ‘Entrance To The Ossuary’ with its samples and whispers and female voice only lulls the listener into false sense of security, before ‘Charnel House’ really unleashes the old school Death Metal hell. Of course, you can blame them for being just another band playing ordinary Death Metal, but listening to their material more detailed, the listener can find the difference in the fine, well thought out melody lines the band offers apart from the genre typical low-tuned guitars and guttural vocals. Even real Doom Metal is included in their sound in form of the last killer track ‘Summoning The Sorcery Of Death’, which gives the best overview over their wide musical range. This doomed hymn really crawls out of the boxes, grabs you and takes you back into the rotten tomb. Recommended output for everybody into old school Death Metal. Check them out on: www.facebook.com/morbidflesh, www.unholyprophecies.com