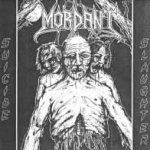 What do you expect from a band whose members look almost exactly like old TREBLINKA on the pictures inside the CD booklet, who call themselves Bitchfire, Leatherdemon, Carnage and Necrophilac and who furthermore come up with songtitles like ‘Pestilent’, ‘Horde Of Satan’, ‘Whores Of Destruction’ etc.? Yeah right, this is indeed another raw and simple Swedish old school thrashin’ Black Metal act with musical similarities to likeminded fellows such as PAGAN RITES or NIFELHEIM (NIFELHEIM’s Hellbutcher even contributed the coverart to this MCD). So, they’re obviously also heavily influenced by old VENOM, BATHORY and MAYHEM and even though their musical abilities still seem rather poor to me (only the vocals already sound convincing) it doesn’t really matter at all as they easily make up for it with the right feeling. According to the label’s infosheet MORDANT’s origin dates back to 1997, at that time they were still more of a Black Metal influenced Heavy Metal act though. Throughout the years they constantly became heavier and darker, released a demo / CD "Die!!!!" in 2001 and in 2002 finally added Leatherdemon on guitars to the original three piece line-up. This fourpiece then recorded the six track assault "Suicide Slaughter", hooked up with Polish Agonia Records for the release of it and are now ready to conquer the underground. So, anyone of you into the totally raw and basic old school Black Metal style should definitely make sure to give these guys a listen as the material still has got a lot more soul than all the technically perfectly executed releases with their polished productions out there. In comparison to all those bands, the MORDANT guys still have a big advantage anyway: they’ve got the true underground spirit in their material which you can’t buy with any big budget! You either have it, or not and MORDANT obviously compose their songs directly from their black hearts, which is the right way to do it! Label contact: www.agoniarecords.dm.net.pl