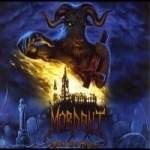 Is the word ‘mordant’ one of the synonyms for all things utterly evil? Yes, I bet it is. Would this particular MORDANT in the very question reign more in Hell than the grandmaster of fire and brimstones himself, Satan? Definitely! Does their logo have a clear reminiscent of the legendary Brazilian SARCOFAGO’s logo? Yep, it does indeed. Do they kick ass music wise as well? Uh, there’s not even a slightest question about that, as they do – fuckin’ big time! MORDANT’s 2nd full-length studio album (even if lasting just over half an hour) titled "Black Evil Master", displays a fine mix between the 80s dirtier and faster side of Speed / Heavy Metal à la VENOM and MOTÖRHEAD, and also 90s Black and Death Metal à la such evil hordes as NECROPHOBIC, UNANIMATED and NIFELHEIM – providing one hell of a rebellious and untamed ride for all listeners into this type of filthy, heinous sounding and Satanic Speed / Black / Death Metal. The Swedish MORDANT basically has it all to make lots of followers for themselves simply because the Heavy Metal community has always liked some melody – as well as evilness in Metal music. There’s more of these two particular elements on "Black Evil Master" than it could be appropriate to have them for just one record. In sense of sheer intensity and passion, MORDANT have a heapload of all that to offer through their songs as well; songs like ‘Rise Of The Antichrist’ and ‘Reaping The Angels Of Christ’ being just two fine examples from the guys’ very passionate yet determined way to get their songs ‘flying like bloodthirsty vampire bats after for a fresh human blood’. "Black Evil Master" is thoroughly a darn enjoyable release – and I am thankful and very happy that Cronis from To The Death Records pointed me to the right direction, making me to discover this fine band named MORDANT eventually. So, thank you Cronis once again – and naturally thank you MORDANT really for making my day. www.mordant.se