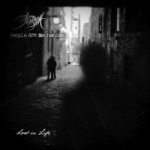 Putting Russia back on the map once more, we have a split-release by two new bands tagged as "depressive Black Metal" on encyclopedia metallum. Both of them released demo recordings to date and "Lost In Life" are their first recordings for a label. So much for the hard facts from the net. Hailing from Ryazan, PEOPLE ARE MECHANISMS is a one-man-project, which is not just depressive, it is somehow depressing. Mastermind Andrew presents us two quite long, honestly said too long instrumental tracks. The first song is using monotony as a stylistic device – how boring indeed. Desolation can be found in every note of the second, way better song ‘Empty Midnight Streets’ with its minimalistic production, reminding of mid-90s DARKTHRONE. Some vocals might have made this a good one. MORODH from central Russia do a lot better on this split. Started as a one-man-project as well, they grew to become a full band. Their first track ‘Desperation’ reminds me of the first IN THE WOODS… album, both in atmospherical and musical aspects. And this can be taken as a huge compliment – my fave on "Lost In Life". The second MORODH song walks in the same direction only lacking a little bit in the production, but it is still worth listening a few more times. MORODH alone should be worth checking this release out. Intersted people should visit: www.facebook.com/morodhband or www.myspace.com/peoplearemechanisms. You can also visit the label page: www.records.threerooks.net or check the EP at bandcamp: http://threerooks.bandcamp.com/album/lost-in-life