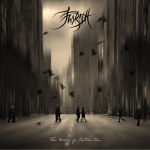 Sometimes, an image will say more than a thousand words. Well, see the cover art for this Russian Black Metal band, and I am sure many will know what we are dealing with. Yes, depressive, melodic Black Metal with post Rock influences. And if the pictures of the band members say anything, well, they do look like any other kind of band maybe a Sludge / Stoner one. Ah, whatever. But back to the music, it is actually quite good. It does remind me of KATATONIA from their “Brave Murder Day” album, with less powerful vocals (and the band uses both screams / growls more in the Black Metal vein and clean vocals), yet with a very similar atmosphere. Although using less hypnotic riffs. Depressive or suicidal Black Metal is not actually that fast, and that remains here. Also some of these bands have a quite depressive recording and production values, which in here I can say is not. There is more of that post Rock thing going on, and in fact, for some strange reason, I like many parts of this. Except for the song ‘The End’ all the other titles are just one word. Problem is that with these bands, one must seem to be in a special state of mind to appreciate it more, and that myself being a fan of fast music, things get tiresome sooner than later. This band has finesse in their works that it is undeniable, and fans of the style will surely find interesting things in here. www.facebook.com/morodhband, www.witchinghour.pl