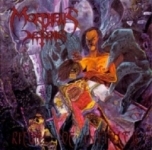 This what most of us old school Death Metal freaks have been longing for. Xtreem Music have made our wet dream come true! They have exumed one of the most beloved New York sounding Death Metal gems of the golden era of the genre. Back in the day when “Ritual Of Infinity” was released it caused a stir in the Death Metal underground due to its somber approach and excellent musicanship positioning them shoulder-to-shoulder with the best contenders of the scene at that time such like INCANTATION, SUFFOCATION or even CANNIBAL CORPSE. MORPHEUS DESCENDS was particularly the perfect mixture of Speed / Thrash playing techniques with the most slow, grinding and twisted Death Metal attacks ever recorded. The album was just released in the right place and time. Eventhough its brilliance, the album suffered of an unfair production (specially the mixing), a common evil with most of the other releases of that timeframe. Those minor flaws won’t prevent you to enjoy this release in its repackaged and remastered form. As a bonus you’ll get the Adipocere 7″ EP which in fact is a welcomed addition to the already brilliant collection of morbid hymns. Too bad if you miss the opportunity to have this in your collection. Rumors say the band is active again, we will have to wait and see if they have retained the spark after all these years of inactivity. Visit the label at: www.xtreemmusic.com.