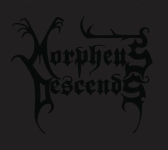 I met this NY Death Metal entity long way back in the 90s. I exchanged demos with them when they were still known as MORPHEUS. Those tapes are still there, waiting for them to dust be cleaned and spiders killed… and because of this compilation, that seems more unlikely than ever. Coming with an impressive presentation including a 24 pages booklet and basically everything the band has released, this compilation starts in the right way with two of their most recent songs created and recorded. Back in the day MORPHEUS DESCENDS was fitting perfectly in the brutal Death Metal scene found in the USA. CANNIBAL CORPSE, SUFFOCATION, IMMOLATION, INCANTATION were some of the names present when defining the sound of the band. As a matter of fact SUFFOCATION was, at least for me, the closer band in style. And that has not changed a thing in all those years. The new songs prove that, adding a powerful recording, with a raw edge, yet still heavy enough to keep it interesting. Of course, very low guttural vocals have to be in there. Some people might disregard many bands of the style for those ultra-low vocals, and maybe a bit of variation could come good here and there, yet in that time, deep vocals were the thing, and the Americans in such things were not as experimental as the European counterparts in that area. This compilation also includes their only full length album “Ritual Of Infinity”. If there was something that kept this band from being more well known, it was the label that released it back then. JL America was known back then for a low quality in their releases, that felt like cheap copies, and usually that shows in lower production values. Something that is also noticeable in this debut. Back in the day it was a decent slab of brutal Death Metal, but nothing different from what many other bands were doing in probably a better way and definitely with a better sound. The band continued on a few years after the release of this album with some more recording before fading away in 1997… to then, resurrect many years later. The increasing demand of old bands was taking shape, and although in no way MORPHEUS DESCENDS was a classic band of the style, they were competent enough to be remembered by a few Metalheads. Add to that the difficulty in finding a reasonable priced copy of their material (although the album has been re-edited once some later material was never re-printed), and so it was time to bring it back from the dead. So, for those who were not there in the first place, or those wanting a second chance, Dark Descent Records is doing a very good historic compilation in a luxury way. Leaving things almost intact, I can appreciate that there were some heavy and good moments in the album and subsequent EPs recorded. Overall, this is good brutal Death Metal which suffered from production values in most of their recordings. In fact, this compilation gives hope for the future as the newer songs are for me something the best the band has ever done, now with a proper sound. While not a dark jewel from the past, it is good to see this releases available again. This release also includes a DVD “Visage Of Malady” (playing time approximately 105 minutes – Frank) with some live footage and interviews to have a more in-depth look at the band since their early stages. www.facebook.com/pages/morpheus-descends/121585741278159, www.darkdescentrecords.com