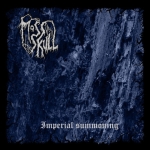 With MOSS UPON THE SKULL from the Belgium capital Brussels, we have a brand new band. No information can be gathered except for their geographical origin (drummer Jense Philips used to be in brutal Death Metallers ORB OF TORTURE – Frank). And, of course, the fact that they now have released their first musical offering. “Imperial Summoning” is a two-song single that shows a band on the way to find their place. ‘Priestridden’ is an attempt to meet the own claim that is “blending the elite of underground Metal and Hardcore”, according to their bandcamp site. Which in reality means they are somewhere between the late DEATH and Techno Thrash like in the second half of the 1980s, VOIVOD or WATCHTOWER for example, yet without meeting the standards of those bands. The riffing misses the final kick, thanks also to the production that lacks of power, and to crown it all, the songs seems a little disoriented. But it’s pure gold in comparison to ‘Soul Constructor’. This one is neither fish nor fowl, it somehow oozes away to irrelevance. I’ve listened to it four times, and still nothing remained in memory. Remember: don’t mess with the elite until you know how to! But maybe it’s only that I’m too old for that technical shit… More information at: www.facebook.com/mossupontheskull, http://mossupontheskull.bandcamp.com, https://soundcloud.com/mossupontheskull