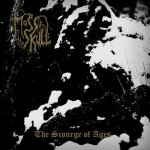 MOSS UPON THE SKULL
The Scourge Of Ages
(self-financed)
17:13min

MOSS UPON THE SKULL is a five-piece that dwells within a dark and misty Death Metal swamp with hints of psychedelia here and there. Hailing from Brussels, the band recently released their EP “The Scourge Of Ages” consisting of 4 tracks of rather unorthodox Death Metal. The first track ‘Key To The Dragonpaths’ starts off quite eerie with a very prominent bass line accompanying the guitar melodies. The song generally conjures that same kinda feeling one gets when listening to NECRO CHRISTOS, especially because of the similar vocal delivery. However, MOSS UPON THE SKULL also have this certain psychedelic feel to them which gets displayed very well in the opening track. Especially the very soft guitar tone adds up to that. The second track adds some more speed to the EP but unfortunately with such a guitar tone this does not really work that well in my book. While the first song was kept at a very slow pace throughout its whole duration, the minimal distortion worked pretty well but as soon as the speed increases it lacks of power. ‘Cursed Crown’, the third track, displays the band in a slightly different light since there is a lot more groove going on than in the previous songs. Again the guitar tone is what doesn’t appeal to me at all. If all the songs would be in the same direction as the opener it definitely would work, but not with this one. The last track finally gets back to what happened in ‘Key To The Dragonpaths’. Even though it is faster, this time it works pretty well because of the song being not only carried by the riff work itself rather than the whole band as an entity. MOSS UPON THE SKULL are definitely a band for people with an open mind when it comes to music because they’re actually neither fish nor fowl. On one hand they might be not heavy enough to some but on the other they probably are too heavy for others. Nevertheless they deliver a quite interesting songwriting approach and also seem to not care about what is going outside of their world which is definitely a reason for you to check them out, isn’t it? More info at: www.facebook.com/mossupontheskull, http://mossupontheskull.bandcamp.com