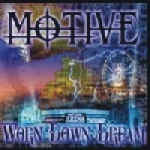 "Worn Down Dream", the new full length by Phoenix, Arizona based four-piece MOTIVE should be of interest to all those of you who still worship the godfathers of Thrash Metal, SLAYER! The band has already released another album ("Damned If You Do, Dead If You Don’t") and a four song EP, both completely on their own. But I suppose with this new ten-track affair the established labels should definitely take notice, cause the intensity these guys deliver throughout the approx. fourty minutes is very impressive. It seems that they worship SLAYER’s "South Of Heaven" album the most, as the more "melodic" parts of the vocals and the songwriting in general reminds me a lot on that period of LA’s finest. But MOTIVE are far more than just a highly talented SLAYER inspired Thrash unit. The vocals are most of the time a lot more hateful, partly even Hardcore influenced, and the songs have definitely enough of an own note to them. It’s just that certain drum parts, some of the riffing and the way Steve Buschart gets his vocals out – all that together has got this typical SLAYER vibe, which I personally don’t mind at all, cause the band consists of talented enough musicians, who are able to compete with many established names already. So, in case you got curious now, feel free to contact the band at these addresses: www.motivemetal.com, email: motive1@worldnet.att.net