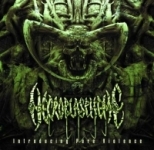 First of all, I have to thank Nikro from Destructive Records for having given this CD to me. Let’s talk about the thing now. Here we go with a quite cool Death Metal act from Paris, that had already left a good impression on me with their first demo called "Foetal Sodomy". It’s amazing that these dudes have released an album one year only after their first and only demo. OK, they know how to handle their instruments, and their compositions are quite well done, variated, with a lot of hooks and cool bridges, but I think there aren’t that much differences between the demo and the album. They should maybe have waited a bit to let the maturity do its work. Don’t get me wrong, NECROBLASPHEME isn’t childish Death Metal at all. According to me, it’s promising, and if these Metalheads work harder and benefit of a good promotional work, they could definitly become one of the most interesting Death Metal acts from France with bands like HYPOKRAS, BYATIS, VORACIOUS GANGRENE (rip?) or REPUDIATE for instance. The production is clear, powerful and doesn’t lack of aggressivity. The riffs are interesting and one can feel that NECROBLASPHEME plays coherent songs, without trying to sound brutal during 30 minutes. It sounds like a mix of American and European Death Metal without ripping off the riffs of their idols. Sometimes a little DEICIDE touch remains between the riffs, but hey, it’s not bad at all. But, here come the critics, as everyting isn’t perfect in the actual Metal scene. I am quite displeased with the vocal department, as the singer tends to sound boring after a while. His brutal Death orientated voice (understand "frog noise" orientated) tends to create a linearity through the running of the album, and it’s a pity, because the music offers so much possibilities of variations. Yeah, this voice is a bit too common, lacking of identity. It may sound a bit harsh, but that’s the way it sounds. Anyway, for a first album, NECROBLASPHEME managed to do something interesting enough, with a coherence in the music. If you are into French bands like ADMORTEM, REPUDIATE or American Death Metal, this act should please you. Keep on working on developing your identity, you are above the average! Contact: www.necroblaspheme.fr.st, www.destructive-records.com