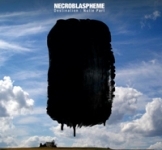 Bonjour mon Metal amis – welcome on board the high speed Death Metal train NECROBLASPHEME departing regularly from the French capital at 6:06 o’clock. The first destination is for sure a railway station somewhere in the neighborhood of the former highspeed Metal kings VADER. The French band is a wild collection of musicians which had been involved in other French underground bands before they founded NECROBLASPHEME in 2001. After several line up changes and their debut album via Destructive Records (R.I.P) they found a new home for their creations in Agonia Records. The cover artwork is maybe not the best chosen option to identify their second album "Destination: Nulle Part" at first glance as a pure Death Metal release but believe me after listening to the first three songs you will understand why I choose the term Death Metal train. The album has been recorded at Drudenhaus Studio and the release is also offering a great sound which is so important for this style of music (but not really a surprise if you keep in mind that ANOREXIA NERVOSA used this studio for recording their albums). The presented 9 songs are Death Metal at the highest possible speed level without the slightest risk to get lost in the Grind chaosphere. Especially the drummer should get a medal for this record – songs like ‘Descent’s Genesis’ are living through his work and this song is like facing a train at 250 miles per hour. Everybody who is missing the good old VADER days ever since their cult album "Black From The Blind" will shed tears after listening to this release. So finally there is only thing to say – get your ticket to the Death train. www.necroblaspheme.com, www.agoniarecords.com