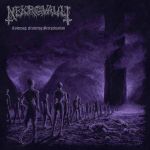 This is the debut album of this German band, formed back in 2017. Pure Death Metal with a bit of Doom Metal passages. The overall aura is similar to that of early INCANTATION although some AUTOPSY and certainly BOLT THROWER touches can be heard. The guitar tone is of that suffocating sound, heavy, distorted, yet never losing the grip of a grim melody, in a way similar to DEAD CONGREGATION or NECROS CHRISTOS. The productions is incredible and fits their style really good, everything sounds organic, if maybe the snare drum could be a bit louder, but the monstrous guitars with all that devilish distortion, still sound clear. Also although being the first album, this sounds like a very mature band in all aspects, with a musicianship in a very high level. They do have a sound that recalls old American Death Metal bands, yet there is that thing that makes them sound European, and that amalgamation gives the band a killer boost of dark energy. Some of the songs are quite long, around the 8 minute mark, thus giving the band the freedom to create various atmospheres within one song. And while the band shines on their doomier parts, they are also very heavy and solid in the faster parts. In the song ‘Basilisk Fumes’ I can almost hear a very “Warmaster” vibe that only few bands are able to conjure. The cavernous vocals are just right on to increase the cult of death, with some very interesting vocals effects in many songs that whilst simple, they are effective and turn that suffocating aura into chains of imminent death. This is the perfect case of a band that invokes the old Death Metal sound, making it its own and take it to a new era with a fantastic grandeur. One of the best releases of this year and for sure a classic to be. www.facebook.com/nekrovault, www.van-records.de