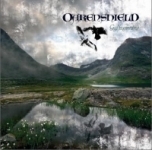 A corn field fully grown in a late summer evening somewhere in the northern hemisphere  before the inner eye of Ben Corkhill (only member/master of this band) and the last three FALKENBACH releases in his side pocket could be the first "unserious" approach to this release from England’s new Pagan Metal hope OAKENSHIELD. So many bands during the last 2 years released records in the vein of FINNTROLL, ENSIFERIUM and WINDIR and we all so easily forgot that FALKENBACH released their first album over 10 years ago (in 1996 via No Colours Records to be precise), maybe before the term Pagan Metal has been completely stripped to its bones. OAKENSHIELD did remember and the band was one of the rough diamonds on the last Metal Message Sampler (Part IV) so I really expected a lot from their debut release on Einheit Produktionen. The album starts with ‘Ginnungagap’, a very epic song and without doubt one of the highlights on this release (together with the ‘The Death Of Baldr’) and OAKENSHIELD are never losing track of their corn field during the one hour playing time. The base feeling of this release can be found on nearly all songs and spoken word passages, pipes & violin furthermore deepen the great atmosphere on this release so "Gylfaginning" has become a beautiful trip to costs long forgotten. Only point of criticism, to say it again in an "unserious way", is that Ben could maybe extend his second voyage to some more unknown costs / corn fields. Great release and definitely a must for all Pagan Metal maniacs – so let’s start the ride to Hel! www.oakenshield.org, www.einheit-produktionen.de