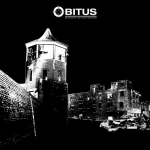 A one song album… yes, ONE song at 45 minutes. In the extreme Metal scene this is not an easy thing to do. And even more difficult to achieve success. Well, here this Swedish duo of hypnotic Black Metal and formed back in 2000 does it in their second album and I must say that they do it with a great degree of triumph. The first thing that strikes is the very distinctive tone of the song. Hypnotic and asphyxiating is the name. There is melody hidden under the very fast riffs done here, at times reminding of early Black Metal era DARKTHRONE with some early MARDUK touches and I can sense a bit of suicidal Black Metal references. Even at times a really morbid Death Metal touch can be heard. The sound is completed with a few passages that have more of an industrialized influence, yet never really becoming industrial music per se. Obviously such a long song has a variation of tempos here and there to make things interesting, but I must mention that hardly any time the intensity is lost. The vocals are probably my least favorite thing here, as they are adequate for a Black Metal band, yes, but some variation would have helped to make things more interesting, as it usually keep the same tone all around. This is a beast that must be heard quite a few times to appreciate all of it. Some people might find it hard to digest one Black Metal song of such duration on one sit, and while it has a nice tone of sound, yet it can turn out to be a bit monotone for those seeking the best of it in the first listening. Also, the lyrical aspect of the band is more interesting than just looking for the evil one itself. Man is the greatest evil? Patience and time will make this one grow as the beast it is. It has its rewards hidden in the layers of darkness. www.facebook.com/dronesofobitus, www.hypnoticdirgerecords.com