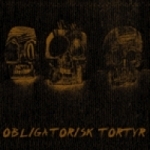 What the fuck is this supposed to be? Noisecore? Grindcore?! Hardcore mixed with Death and Thrash Metal??! I simply don’t get it… OBLIGATORISK TORTYR is the new home of former GRIEF OF EMERALD drummer Fredrik Helgesson, who left his old band after their cool “Nightspawn” debut in order to concentrate on this weird outfit exclusively. And you know what? It doesn’t appeal to me at all! This Swedish three piece has come up with a 25 track album (plus an obligatory additional “secret” bonus track at the end of the disk), and as you can probably imagine, all of the songs are extremely short (mainly not even reaching the two minutes mark). The band plays rather chaotic, mostly fast, extreme music with two different vocalists. One of them is deep growling and the other hysterical screaming all the time. If you could image a mixture of the old THE ACCÜSED frontman mixed with a pig that is supposed to get slaughtered, you almost get an idea of what to expect… To me there’s just no substance at all in the whole album and it ain’t brutal or heavy either. Plus the extremely stupid cover suxx big time!