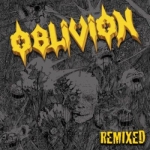 Ah, experiencing and being a part of the heydays of the past underground Speed / Thrash Metal scene is something which – at least some of us, will remember for the rest of our lifes. With ‘we’, I mean us – the old farts when we were at our twenties or something – and got to hear the first demos of METALLICA, SLAYER, NASTY SAVAGE, VIO-LENCE, PROTECTOR, KREATOR and so on. The list is endless really. Trading tapes was of course a very integral part of all that, to become familiar with new bands daily, weekly or monthly – just depending on your own activity as an underground Metal sucker. The deeper you dug the underground Metal scene, the better you became familiar with all the true treasures within it. OBLIVION from New Jersey – that were formed in 1984 and ceased to exist in 1992 – made some quality, well-executed Thrash Metal back in the day, releasing a bunch of demos that were circulated in the underground Metal circles widely; from the U.S.A. to Europe all the way to Japan to Australia to everywhere really, due to a really blossoming and active tape trading scene some 25 – 30 years ago. I also do remember having some heavily traded OBLIVION demos in my personal collection, and was feeling miserable ‘coz I didn’t have them as originals. As soon as they split up, I never expected to hear from them again. The band was reformed in 2011, and while working on the band’s new material, guitarist David Fesette decided to release a compilation of some OBLIVION demos on one CD, paying everything himself without even thinking whether he could made a dime or two out of this particular release, into his own pocket (which even wasn’t the main purpose for getting this compilation of demos on CD out). The "Remixed" CD contains OBLIVION’s latest 3 demos, added with a couple of live songs (‘No Code’ and ‘Mind Ripper’) that were never released as proper studio versions. Back in those days musically OBLIVION played a relatively technical Thrash Metal that was full of chunky and meaty riffs, accompanied by a bit Hardcore type of vocal delivery. They also used quite a lot of gang shout type of vocals (à la SUICIDAL TENDENCIES) within their songs, which in fact, were somewhat typical for many Thrash Metal acts in those days. OBLIVION’s latest 6-track demo, titled "Contents Under Pressure", was their most matured effort – both music and production wise. However, the rest of the 2 demos ("Why Did Johnny Kill" and "War Gives Me Peace Of Mind"), that have also been featured on this demo collection, don’t really pale in comparison to the "Contents…" demo song wise, although the production in both of them undoubtedly left some room for improvement. The bottom line, however, is New Jersey’s OBLIVION did some great sounding Thrash nearly 3 decades ago, so in that sense it was a really wise idea from David Fesette to offer a sort of cross section of the band’s past material on one CD. Now we need someone to release OBLIVION’s first 4 demos on one CD too. Any volunteers – hands up! In the meantime, more about these old school Thrashers can be found at: www.facebook.com/oblivionnj