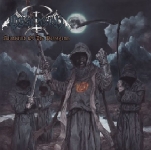 Certain kinds of Metal are never out of style, because they were never really in-style. Blackened Thrash Metal is one of these sub-genres of Metal. And OBSESSÖR from the German area of Eastern Westphalia are a band that’s devoted to this style. Formed in 2009 by members of ZERSTÖRER and the meanwhile defunct BEER PRESSURE, they released a first attack the same year, an EP called “Black Thrashing Blasphemy”. Another EP, two split releases and a first full length (“Blitzkrieg Batallion” in 2011) later, OBSESSÖR (only genuine with the Metal umlaut) are ready again for another full length strike: “Assassins Of The Pentagram”. Expect anything that might be expected from a band of the genre – you’ll for sure get it! But somehow OBSESSÖR are a little more special anyway. Maybe it’s the subliminal early 1980s Metal feeling they transport. Maybe it’s the rare melodic harmonies and solos. And it’s the vocals of Necroschwanz for sure. Besides the typical dirty thrashing vocals, he spices his performance with falsetto screams in best Power Metal style. But on the other hand, nearly any cliché of the genre will be fulfilled. Song titles like ‘Return Of The Usurper’, ‘Sacrificial Lust’, Necromancer’ and especially ‘Black Speed Thunder’ can’t tell you lies. And the fact that I needed a second hearing to recognize their version of DESTRUCTIONs ‘Devil’s Soldiers’ as a cover song says a lot about OBSESSÖR too. But as much as they fulfill the clichés, OBSESSÖR feed the desire of those who love this music. Since I sometimes need nothing else but simple Metal without frills, “Assassins Of The Pentagram” will be a fine choice. Anybody else who digs blackened Thrash Metal should check out OBSESSÖR for sure: www.facebook.com/blitzkriegbattalion, www.undercover-records.de