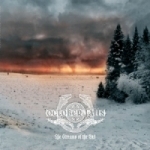 Finland doesn’t have a middle ground, they choose the melodic and happy Metal style on which a lot of bands jumped these last years, or better take the most absolute melancholy and darkness. Don’t worry, it is the last case we are dealing with in the case of OCTOBER FALLS, who present their third official release on MCD, after a full album in 2005 and another EP in 2003. And, moving away from the usual tendency of the French label, this project of Mr. Mikko Lehto (in this occasion accompanied by a session bassist and drummer), is oriented towards some kind of Black / Doom with Folk elements, which remind me of what bands like AGALLOCH, EMPYRIUM or ULVER did in their early days (on a less blackened level on the side when we speak about ULVER), or even, on a smaller degree, to the very first OPETH / KATATONIA. More for the high melancholy than for the music itself… Even the canadian WOODS Of YPRES come to my mind, but without any doubt, the melodies and acoustic guitars and the general atmosphere that can only make you think of more nature in autumn, are purely reminiscent of AGALLOCH. Perhaps this could be the weak point of this recording, its high resemblance with Oregon’s, but on the other side, aren’t there a lot more bands being copied these days? So, is it really a problem to have some similarities with the above mentioned? I don’t think so, especially seeing how good these four tracks are and the high amount of feelings they can achieve. The vocals (the blacker part of the album) are helping quite a lot, being tearing and not too present in the mix towards the rest of instruments, which doesn’t happen with the acoustic guitars, which are especially present when they appear on the shades of electric guitards doing pure Black Metal riffs and creating a counterpoint between the raw atmosphere and the beauty of the first ones. Even though, the recording is quite short with its almost twenty two minutes, and I’d like to have a longer recording to make up a good opinion of the music of this band, but for the ones who like the mentioned style, you can buy this stuff without any fear. It has been released on a digipak CD version and on MLP, with a really beautiful cover. www.debemur-morti.com